Margaret Grguric-Smolik’s family came from Croatia, a country that for seventy years (1920-1990) was part of Yugoslavia. The town of Voćin is located in the north central agricultural region, and they lived on a farm with her grandparents. Margaret is the youngest of three daughters. All three were born during Hitler’s rise to power and the devastating events of WWII.

When Hitler marched into Yugoslavia in 1943, the family lost their land and for two years survived in refugee camps. After the war, they lived in Austria until they emigrated to the United States, to Iowa, in 1952.

Margaret’s book, Like A Haystack, provides details about the life of her family and the challenges they faced in their many moves. Some stories are sad; some are humorous; some tell about normal, everyday life. Most importantly, those who read them can come to understand and learn from first-hand experience what difficulties displaced people encounter. The book focuses on several crucial dynamics:

-The contrast between life in WWII-era Europe and America
-The endurance needed to survive war, cruelty, and suffering
-The tensions that result between young and old in adjusting to new cultures and values
-The willingness to do whatever it takes to achieve the “American dream”

Since the book’s publication in summer 2014, Margaret has given many presentations to service and social clubs, book study groups, public libraries, students, 4-H club members, and other organizations. She accepts invitations to share her experiences. She likes to entertain her audiences with humorous stories about cultural traditions and the music of Croatia and Austria. She plays several selections from her collection of CDs. One of her favorite is Austrian yodeling.

Margaret’s familiarity with Croatian, German, English, and a bit of French, has given her a solid base on which to build her love of language. She learns words and the rules of grammar easily and enjoys copy/editing. She has edited five books and invites writers to contact her. 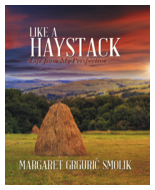 Margaret Smolik is a professional copy editor and author. She earned BS and MS degrees from Drake University, Des Moines, Iowa, and taught English and composition for many years including North Iowa Area Community College, Mason City, Iowa. She and her husband Gary raised four children. Currently living in Osage, Iowa, she is an active member of her community and writers’ club.