The below exhibits are a joint project made possible by Spuren e.V. in Germany and TRACES Center for History and Culture (based in Iowa, USA), both of which use social history in order to facilitate historically-oriented understanding between people. Further information about POWs from both sides of World War II can be found at www.TRACES.org.

70 years after the Bombing of Dresden:
Beauty and Tragedy

Galerie 13 regularly displays oils and watercolors of the German painter Eugen Luick (1908-1991). In July 1944 he went as a soldier armed with a paint-box to Dresden and captured the beauty as well as the destruction of the unique cityscape in his pictures. At the same time, ten thousands of prisoners of war were at Dresden; their history told in a supporting exhibit available on loan from the American educational non-profit organization TRACES and its German sister organization, Spuren e. V. Dresden’s Frauenkirche 1944 (left) and after the bombing of 1945, as painted by Eugen Luick; from his book Dresden: Schönheit und Tragödie (1985; English: Dresden: Beauty and Tragedy)

Behind Barbed Wire: German and American Prisoners of War in World War II

In World War II the western Allies captured hundreds of thousands of German soldiers. They shipped some 380,000 of them to North America, where they were imprisoned in over 600 base and branch camps. 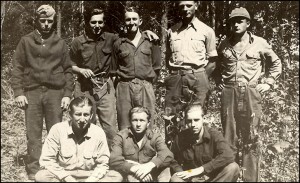 German Prisoners of War working in Minnesota, circa 1944

At the same time, about 90,000 U.S. American Prisoners of War were in the Third Reich, where they suffered as much as if not more than the German civilians among whom they found themselves.

In the nights of the bombing of Dresden—just before the war’s end—there were tens of thousands of  Allied POWs, as well as concentration-camp inmates and German refugees in the Saxon capital. Immediately after the bombing, the POWs had the task of digging the uncountable corpses from the destruction of the famed “Florence on the Elbe” from mountains of soot and ashes, stack them in piles and burn them.

Before Kurt Vonnegut died, he worked with TRACES, an American non-profit educational organization, to tell once more the story that forms the core of his Slaughterhouse Five, which tells of his having survived the firestorm over Dresden, unleashed by his own compatriots.

Now the stories of German POWs in the United States, as well as those of American POWs in the Third Reich can be told in an exhibit form, titled Behind Barbed Wire (Hinter dem Stacheldraht). For further information, contact staff@TRACES.org.